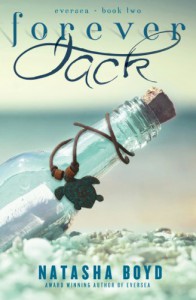 A riveting conclusion to a six-star series. I'm still thinking about it days after.

Eversea was not a book that you can easily forget and not only because of the questions we're left with after it's conclusion. For months after reading it, I found myself thinking back to the characters, the story, and the setting wanting more. I couldn't wait for the sequel Forever, Jack to release and to finally have the long awaited answers to my questions.

Following the conclusion of Eversea, Keri Ann has spent her time bettering herself and figuring out exactly what she wants from her future. She's forgone her own desires for so long that it's high time she focus on what she wants and following her own dreams. In the five months since Jack walked out of her life, Keri Ann has furthered her career as an artist, both from being featured in major art exhibits and being accepted into art school. She didn't let the loss of the love of her life ruin her and this spoke volumes about her resilience and strength. She didn't pine for him, though his absence was palpable.

So when Jack unexpectedly barges back into her life and threatens to upset the careful balance she worked so long to achieve she doesn't know whether to scream and rant and rave at him or kiss his face. (Personally, I vote for the latter.) There are a lot of things that they need to discuss and although she recognizes that a lot has been left unsaid, she's afraid to let Jack and the circus that surrounds him back into her life.

I couldn't imagine how this relationship was going to do anything but bring out every single ugly insecurity I had. I'd promised Jack I'd take the bad with the good, but I wasn't sure I was strong enough for this.

When she hears his explanation as to why he's stayed away for so long she's accepting, but not as much as she had been in Eversea. Perspective, time, and lots of self reflection has shown her what a relationship with a superstar like Jack Eversea could mean for her. She's a small town girl with her own dreams and aspirations. Having to exist in Jack's shadow could quite possibly muddy everything that she's come to want and she isn't willing to give that up - even for love.

Let me stop right there. Can I get an amen?

I am so tired of women in books that bend to their mans every whim. Compromise on what to have for dinner or where to go for a movie, yes, absolutely, but in no way should a relationship affect your dreams. I loved that Keri Ann didn't automatically jump back into Jack's open arms and seriously gave consideration to what she wanted. Love love love.

Even more, I loved that Jack gave her that option. He knew the risks that were involved with her choosing to be in a relationship with him and he let her weigh the cost without unduly influencing her. It said a lot about his character and maturity that he didn't badger her beyond admitting his feelings.

"Partly because I don't know that you want the real Jack and his crazy life and everything that goes with it." He returned. "And I'm not sure, going forward, how to keep that separate. It could still hurt you."

"You are so beautiful, so talented, so honest. And you are strong. Let me be a part of your life, and be brave enough to be a part of mine. I know you can be, I've seen your strength. Please believe in us."

It was everything that I would imagine a normal, regular girl falling in love with a movie star would be like. If any girl wanted to imagine how they would react to seeing their Hollywood crush, I'd direct them to this series for inspiration. The entire time I was reading I kept thinking that this is exactly how I would react if I were Keri Ann.

I was made to love you. I never fell, I was already there. From the very first moment.